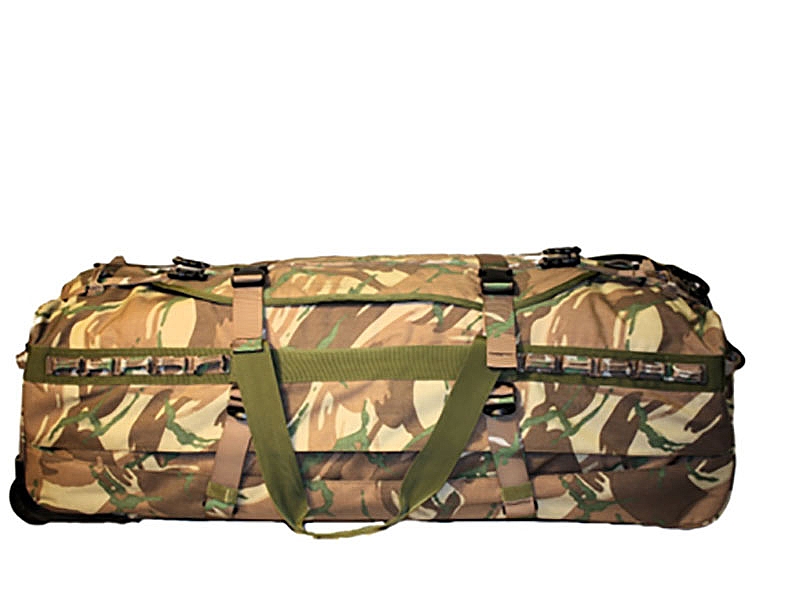 Designed to withstand the brief of “will survive a helicopter drop” and complies with BS 13407-1999. All the holdalls have a stress tolerance to exceed a 100 kilos payload. Designed to survive deployment across the most severe terrain and conditions: All the bar-tacks machined-in exceed the industry standard and have set new breaking strains to the point where the rucksacks will not only allow a wounded colleague to be dragged to safety but will in fact tow a transit van. (Torque on a transit van is 3200nm, our breaking strain is 3411nm)

The Ridgeback Range of base-camp bags and equipment haulage solutions give the Brigade on the move options that they have never had before. It is designed to give the heavy load an easy pass when on full brigade deployment; with a six-way lid compression system that takes the pressures off a zip when fully loaded. This also enhances the Ridgeback’s ability to survive a long range kit drop when replenishing troops at a PB.

We have fitted crampon loops to each end and both sides. This allows the Ridgeback’s to be daisy chained to create a crate sized load that can be air dropped or stowed in a ship’s hull, making the transportation of troops gear that much easier. Crib Gogh not only thinks of the end user but we also consider the logistical chain into the equation when we develop our kit.

The daisy chain system will also aid cover for troops in the most hostile situation, where the ability to improvise will save lives. The design also reduces the number of locks to one, with all the accessory pockets on the inside of the bag. The ridgeback is available in

We also do a covert version of the 100ltr wheeled ridgeback that has a concealed drawer system in the base that will allow personnel (licensed/legally to do so) to transport weapons. This allows the drawer to be tailored to suit the legal requirement of the weapon being discreetly moved. Please note that this unit will only be sold when all of the legal requirements of the purchaser have been met.